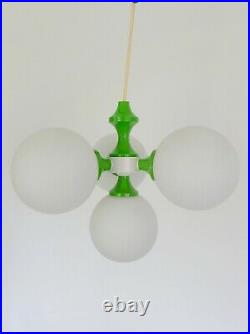 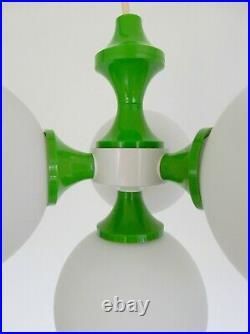 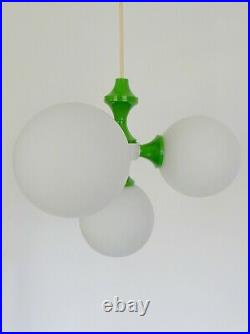 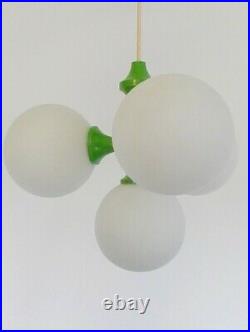 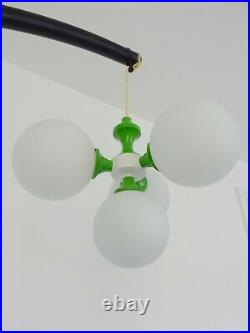 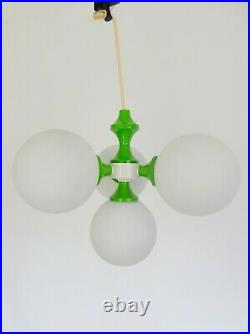 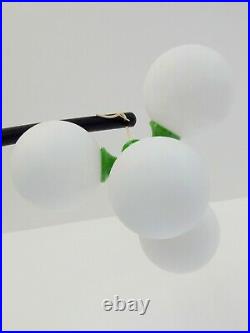 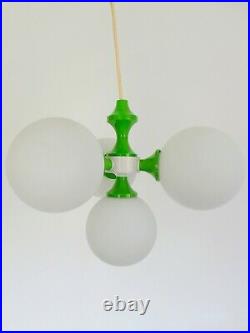 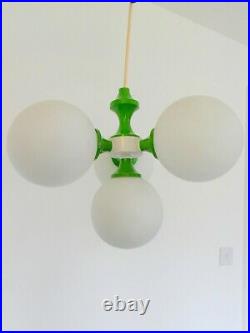 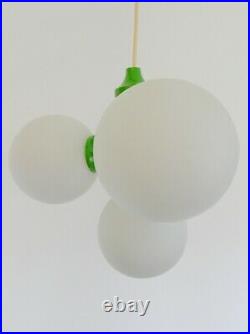 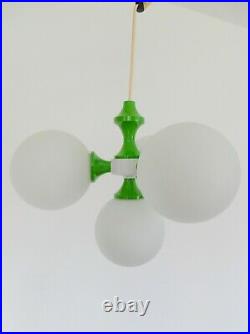 Designed and manufactured in Germany, this fabulous light is a seriously cool piece of 1970s design with a great atomic, space age look. The ceiling rose section still bears its original sticker from retailer Richard Essig of Besigheim.

We believe that the may have been manufactured by Kaiser Leuchten of Neheim-Hüsten, Germany, though we have not been able to confirm this. The light consists of four spherical opaline glass shades, which are joined by a central plastic structure made from green and white plastic trumpet shaped segments, which are reminiscent of Eero Saarinens iconic tulip table bases. Each glass globe houses a single bulb with a screw fitting, max 40W. This show-stopping pendant would be a striking focal point in any mid-century, atomic or contemporary interior. We think it would look fantastic hanging from an ornate ceiling rose to create a striking contrast between traditional and space age design. The light is in excellent vintage condition.

There are some very light cosmetic marks to the glass globes, which are only visible when held very close up, but no chips or cracks. Each globe attaches to the central structure via a sprung metal fixture some of the chrome on these metal sections is starting to flake away, but this is completely invisible when the globes are fixed in place. As with all vintage lighting, we recommend having this light rewired and installed by a competent electrician.

Richard Essig / Kaiser Leuchten. Contrary to popular belief, Essig did not produce their own lighting but instead retailed products made by other manufacturers, which they frequently labelled with their own name. The company was founded by Hermann Kaiser in the 1890s, and initially concentrated on the production of lamp parts for other lighting factories. The companys real breakthrough came with the development of a very cheap kerosene lamp, later followed by a range of kerosene stoves and pit lamps, which were exported as far afield as China and Japan. In the period between the two world wars, the company concentrated on the production of electrical lighting. Their Kaiser Idell lighting range, designed by Bauhaus designer Christian Dell, was incredibly popular from the 1930s onwards, and these pieces are now considered to be design classics. Production intensified to meet demand, and the company workforce increased from 350 employees in 1934 to around 700 by the beginning of the Second World War - the company even had its own rail connection to accommodate them! The history of the Kaiser Leuchten factory took a darker turn during WWII, when its manufacturing facilities were completely destroyed, resulting in the tragic deaths of many laborers who were forcibly employed there. After the war, the factory was rebuilt and production expanded rapidly. In the late 1970s, the company was acquired by the Thorn Lighting Group.

This became the property of an international investment company in 1993, and the remnants of production were relocated to Dortmund in 2000. Today, the Kaiser Idell brand and lamp production are now owned by Republic of Fritz Hansen in Denmark. At Oriel Interiors, we feel that is important to emphasise that this is an original vintage piece, which has been used and loved by previous fabulous! We endeavour to only sell items which we feel are in a reasonable condition, which we would be happy to live with in our own homes. However, many products will demonstrate some signs of wear e.

Small scratches, indentations or discolouration which we do not feel detract from the overall look of the piece. Due to limited space in our showroom, we must ask that collections are made within two weeks of purchasing an item, unless otherwise arranged by prior agreement. The item "Richard Essig Kaiser Leuchten atomic sputnik green glass midcentury light retro" is in sale since Wednesday, October 7, 2020. This item is in the category "Home, Furniture & DIY\Lighting\Ceiling Lights & Chandeliers".

The seller is "martjohn349" and is located in Denbigh. This item can't be shipped, the buyer must pick up the item.