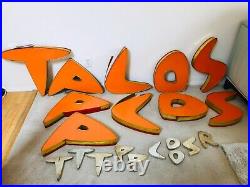 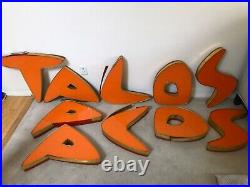 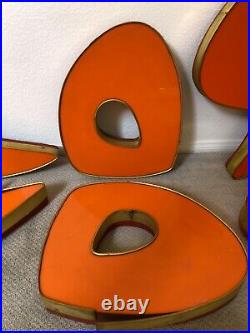 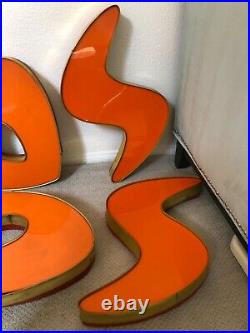 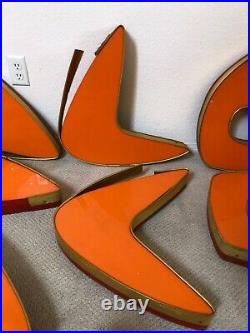 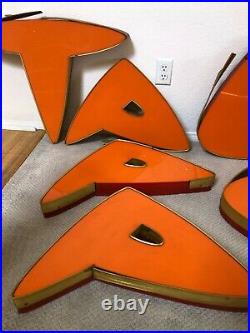 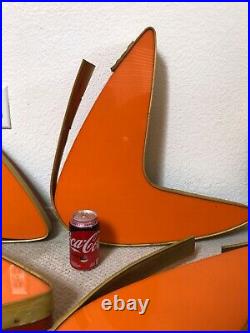 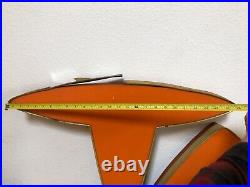 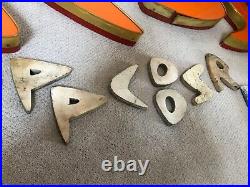 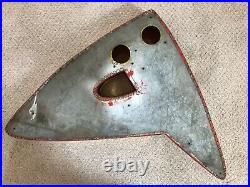 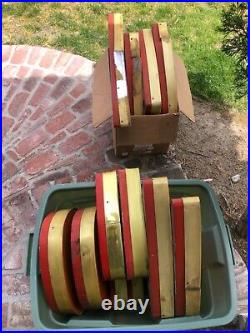 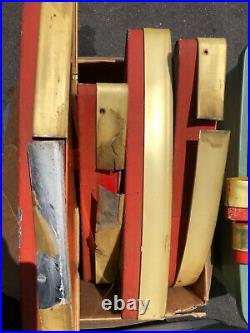 These are extremely cool and RARE original Southern California Antique Mid Century Modern Googie Atomic Signage Letters from an old and long defunct restaurant or business in Los Angeles, California. These signage letters date to the 1950s - 1960s, and are completely handmade and one-of-a-kind artistic objects comprised of plastic and steel.

The plastic is orange, the frame for the letters are steel and they are painted red on the sides. These pieces were found in a storage unit, along with some very old restaurant equipment and Formica furniture. Googie Art and Architecture was famously invented in Southern California, and these are original pieces from the movement and the era.

These pieces are intact, and useable, but have various condition issues from decades of usage and storage. Some hairlines, scuff, missing or broken pieces of plastic trim, etc. It would be too tedious to give the dimensions for every letter, but the large T is approximately 28 inches wide.

A photo is included with a Coca-Cola can to reference scale as well. While modern chain businesses such as Dennys and Norms still advertise their restaurants with Googie Atomic signage and architecture, the real period pieces are nearly impossible to find, and rarely survive this long. Please check my other listings for more wonderful and unique artworks! Googie is a futurist style of architecture that came of age in the mid-twentieth century in the United States, particularly Los Angeles and the surrounding suburbs in Southern California. Googie buildings incorporate strong geometric shapes, upswept roofs, the suggestion of motion, and a mixture of materials ranging from steel to glass to craggy boulders.

Googie is a low-rise architectural style most common in designs for restaurants, car washes, bowling alleys, gas stations, drive-in theaters, apartment buildings, and occasionally single-family homes. Googie design, along with its close mid-century modern cousins Populuxe and Doo Wop, embraced the futurism of the atomic age. It conveyed optimism and a sense of progress, and many of its surviving structures are cherished architectural landmarks. A Brief History of Googie Architecture. Google architecture is largely a product of the atomic age, and it rose to prominence in the 40s and 50s.

Googie architecture began in Los Angeles and developed out of Streamline Moderne, a 1930s architectural style that used bold, swooping shapes and nautical themes. As cars and airplanes eclipsed boats and trains as the most common forms of transportation, architectural styles shifted accordingly, and the Googie style emerged and took off after World War II. According to architectural historian Alan Hess, there is a dispute over which building was the first Googie design, but one candidate is a Bob's Big Boy in the Los Angeles suburb of Burbank, designed by Wayne McAllister and built in 1949. Johnie's Coffee Shop on L. S Miracle Mile and Norm's Restaurant on La Cienega, were both designed by Helen Liu Fong and built around the same time.

As the style developed, other pioneering Googie designers rose to prominence, included the architect John Lautner (who designed the movement's namesake, Googie's Coffee Shop on Sunset Boulevard in West Hollywood), Douglas Honnold, and Eldon Davis and Louis Armet (in business together as the Armet & Davis design firm). The 1950s were a fertile time for Googie design in Southern California, but the movement also spread throughout the nation.

Prominent Googie structures were built in locales including Wildwood, New Jersey; Seattle, Washington; Colorado Springs, Colorado; Phoenix, Arizona; Miami, Florida; and the 1964 World's Fair in New York. The space age and the atomic age arguably reached their peak with the Apollo missions of the 1960s and early 1970s, and at this point, Googie architecture began to fall out of favor. Many Googie buildings have since been torn down in the intervening years, and those that remain are now considered retro marvels worthy of preservation.